When  EV manufacturer Rivian rolled its first R1T off the production line in September 2021, I told my family that I would love to own an R1T someday. After daydreaming a bit and designing my own, I noticed one large obstacle to my future purchase of a Rivian, I cannot legally buy it in my home state of Pennsylvania. If I wanted to purchase a Rivian, I would need to complete the sale and title for the vehicle in the state of Maryland. I could then retitle the vehicle in Pennsylvania at a later date. State governments’ dealer franchise laws are making EVs even more inaccessible to consumers both in process and price. If we want more fully electric vehicles on the road, then states need to allow consumers to decide how they will purchase their vehicle.

How We Got Here

Few people ask themselves why car dealerships are a normal part of the car buying process. If you want to buy the latest smartphone, you are free to go to a store owned by that manufacturer or even order it from them online. If the cellphone market worked like the car market, you may find yourself crossing state lines to legally buy the cellphone that you want. In the car market, the manufacturer sells to a third party and then the third-party dealer sells it to the customer with an upcharge.

Subscribe to our exclusive email designed for conservatives who care about climate change.

Dealer franchising was used as a successful way for car manufacturers to focus on their production goals and outsource the sales process to dealers. States started to enact dealer franchise laws in the 1900s when there were few manufacturers to choose from. The fear was that manufacturers would use unfair practices or drive dealers out of business entirely, leaving very little competition within the auto sales market. Companies like Ford dominated the industry, and they could largely set pricing as they saw fit. States outlawed the direct sale of cars from the manufacturer to the consumer to ensure competition remained within the car market. The unintended irony is that many decades later these laws stifle competition. There are many more manufacturers in the market today, but dealerships have formed into larger conglomerates that largely control what does and does not go to market in their state.

Dealer franchise laws took this 1900s car buying process and made it the law.  Imagine if every other industry had to continue doing business the way they did in the 1900s, we would have seen much less innovation than we do today. You likely would not be ordering goods and services directly from your phone or smart speaker.

The NADA is one of the largest organizations lobbying to protect dealer franchise laws. NADA published a video explaining why they believe dealer franchise laws should remain in place. Their argument is largely focused on how dealerships help consumers navigate the car buying process, but companies like Rivian offer arguably the same level of service too. The argument that shopping one way is better than shopping another way should not be enough to keep it in law. If consumers want to buy through a dealership, they should be free to do so, but they should be equally free to buy directly from a manufacturer. Some could say that shopping for electronics in-store is better than shopping online because it adds an extra layer of service, but should there be a law preventing you from purchasing a phone or TV online?

I recently had the opportunity to speak with members of the Public Policy team for Rivian while at the 2022 ACC Summit in Washington, DC. They explained their effort to challenge these dealer franchise laws. Tesla, Lucid, and other EV companies also invest heavily in challenging these laws. Tesla’s store-front business model is what forced many states to revisit these laws and enforce them or in some cases provide limited waivers for Tesla. The State Policy Director for Rivian, John Stephenson, told me:

A law that was written with the supposed intention of supporting free-market principles now serves as a prime example of cronyism that instead prevents the market from moving toward cleaner alternatives and lower prices for consumers.

In an effort to lower Co2 emissions, states like New York offer tax incentives to buy electric vehicles. Some states have granted limited exceptions to allow Tesla to make sales via their storefronts within the state. The pool of electric vehicles that New York residents must choose from to capitalize on this incentive is limited by dealer franchise laws. Some other states, like Florida, have no incentive program for EVs, but the state also has no dealer franchise laws. Consumers in Florida are free to buy directly from the manufacturer. As a result, Florida EV sales were outpacing New York by 60% in 2019, according to IHS Markit.

In the state of Pennsylvania, these laws are housed within the Board of Vehicles Act. This act covers a wide variety of laws related to vehicle sales, including prohibiting car manufacturers from selling directly to consumers and even outlawing the sale of cars on Sundays. In 2014 the Pennsylvania legislature provided an exception for Tesla, but this was short-sighted as more EV manufacturers have come to market in recent years.

States like Pennsylvania and New York are missing out on the economic and tax benefits associated with vehicle sales that occur outside of their states. The states’ dealer franchise laws are encouraging consumers to do business outside the state rather than within it.

According to the NRDC, only 22 states allow direct car sales from the manufacturer, and another 11 have made limited exceptions for Tesla. 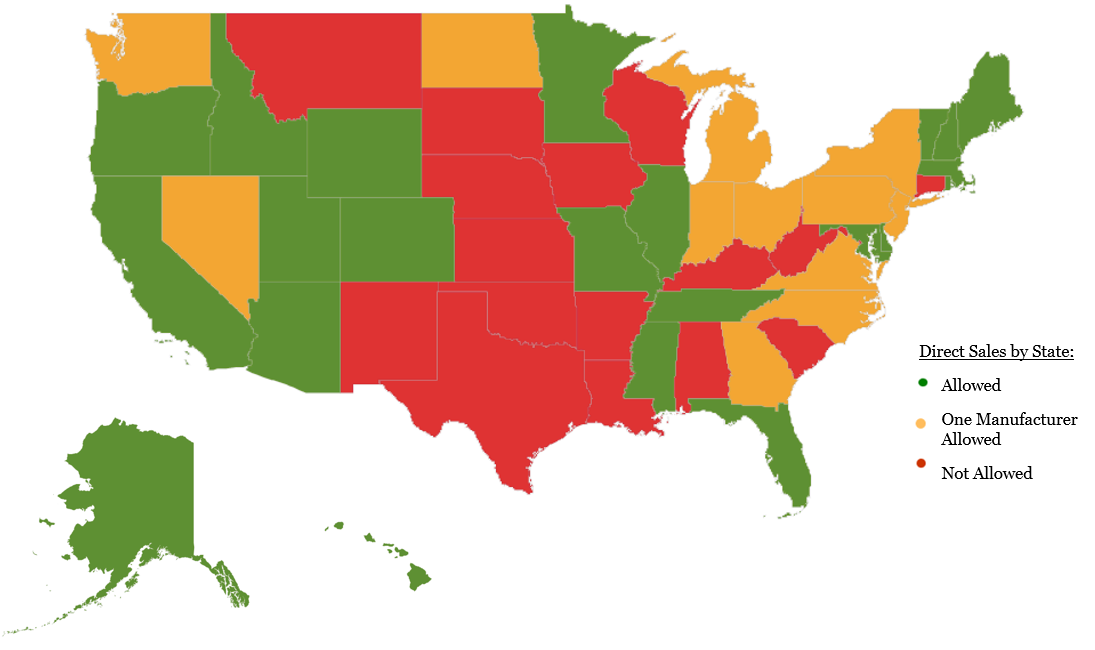 Fortunately, this is not a partisan issue. Groups on both sides of the aisle have acknowledged the need to reform these laws if we want to see more EVs on the road. Unfortunately, besides the limited waivers for Tesla, very little has changed. It will take legislators from all parties in many states to reform these decades-old laws. Pennsylvania State Senator Scott Martin (R-13) said the following when I asked him about dealer franchise laws, “In order to turn around Pennsylvania’s economy, we must continue to find ways to remove regulatory barriers that not only inhibit growth, but also cost our families more of their hard-earned money.”

Pennsylvania Attorney General and Democratic Candidate for Governor, Josh Shapiro recently sent an advisory to dealerships about unfair and deceptive practices. The AG’s office had been receiving increased complaints about unfair business practices. Reforming dealer franchise laws would force dealerships to compete with manufacturers directly and provide a direct financial consequence through a loss in business if they continue to operate unfairly. Currently, most dealerships are relatively shielded from this consequence because dealer franchise agreements come with control over a territory, so competition in the region is more limited.

In 2009 the U.S. Department of Justice released a report detailing the economic benefits of reforming dealer franchise laws. The report estimates that consumers could see an average savings of 8.6% just by reforming dealer franchise laws to allow direct-to-consumer sales. The savings not only comes from limiting the barriers in the car buying process, but the DOJ found that manufacturers could be better stewards of their resources by adjusting directly to consumer demand, rather than following dealership quotas.

Reforming dealer franchise laws benefit the environment, the economy, and consumers in every state. Until these laws are reformed to allow consumers to purchase from manufacturers, the EV market will continue to be held back.

Clark Strawser is a freelance writer and graduate from the Helm’s School of Government at Liberty University. He received a Master of Arts in Public Policy with a specialization in International Affairs.

How the Jones Act exacerbates the US diesel shortage

Amazon Web Services plans to be water positive by 2030