After an extreme winter storm in Texas caused more than 200 deaths and a loss of power for over 4.5 million homes in February 2021, the Public Utility Commission (PUC) and the legislature worked quickly to find the cause and propose a solution. State lawmakers, such as  Governor Greg Abbott, initially blamed renewable power and state policymakers have introduced legislation that would undo many of the benefits that competitive markets have delivered to Texas energy consumers.

>>>READ: Proposed Energy Grid Fix Is Not The Right Answer for Texas

Policymakers and regulators in Texas should recognize these benefits and reject proposals that restrict energy competition in the state while enacting reforms that bolster grid resiliency and protect households from prolonged blackouts.

What is a Competitive Electricity Market?

In many states throughout the US, electricity has the market structure of a regulated monopoly. These regulated markets create constraints on how energy is delivered to a home or business, leaving consumers with only one option for electricity. Utility companies in regulated markets can choose where their energy mix comes from without input from the consumer. In 1996 Rhode Island sought to create a competitive energy market through the Utility Restructuring Act. This opened the market to non-regulated power producers and gave consumers the option to choose where their energy comes from. The utility supplier remains the same, but the power producer is left at the discretion of the consumer. Power producers compete to offer lower rates and desirable energy mixes to gain business from consumers. Following the success of Rhode Island’s competitive energy market, states like California, Texas, and Pennsylvania all enacted similar programs.

The economy or the climate? Why not both?

Subscribe for ideas that support the environment and the people.

Below are power markets that the EPA classifies as competitive. Some other states have varying levels of competition but the EPA does not classify them as traditionally “competitive” markets. 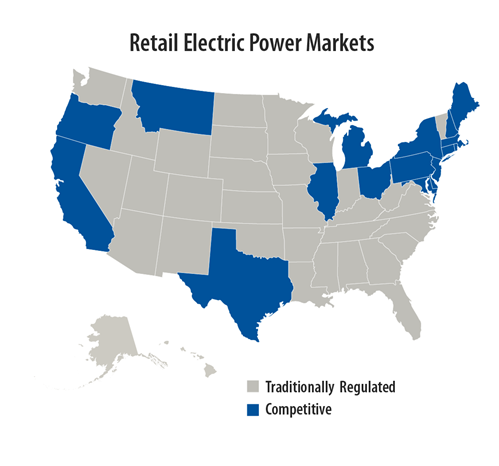 Source: Policies and Regulations | US EPA

How do Competitive Markets Impact Consumers?

In competitive energy markets, consumers often enjoy more affordable power because the producer must actively keep prices competitive, rather than just passing the costs of infrastructure to the consumer. A 2008 study from the Economic Analysis Group (EAG) within the Department of Justice (DOJ), found that, “As market institutions develop there is reason to believe that investment decisions will be made efficiently and that consumers will benefit in the form of lower prices in the long run.” The study suggests that competitive markets could continue to improve upon areas such as exposure of consumers to wholesale pricing, but states should avoid returning to “cost of service regulation.”

Competition in retail electricity markets has empowered consumers with the option to purchase 100% renewable energy as well as other options tailored more to an individual or family’s preferences. The market demand has in turn caused a notable shift in the market toward more renewable options. In contrast, providers or resellers in wholesale markets will negotiate contracts with producers, but any cost savings they negotiate is not necessarily passed on to the consumer. A study of energy markets from 1991 to 2012 found that while competitive markets do not guarantee the introduction of more renewables, they do tend to bring more renewable options to market through a combination of a lack of barriers for new renewable producers and the opportunity for coalition building among consumers to favor renewable options.

Much of the blame for Winter Storm Uri has inaccurately fallen on renewable energy. Critics have pointed to intermittency in power generation when compared to options such as natural gas. As much as elected officials would like to blame one form of energy for the blackouts, the actual failure is a lack of winterized critical infrastructure and planning.

>>>READ: Texas Can Improve Energy Reliability without Abandoning its Principles

The reality is that the grid failure in Texas is not the fault of renewables, but it is the fault of a grid that is not set up to endure such extreme, low temperatures. Freezing temperatures impacted all forms of energy. Some wind turbines froze in place, but the most impacted were frozen pipelines which prevented natural gas plants from getting the supply they needed. With wells and pipelines freezing, supply to plants was slow. Additionally, natural gas wells rely on electric-powered pumps, so the lack of power further exacerbated the problem. A report by the Federal Energy Regulatory Commission noted “Processing plants suffered some mechanical failures, although most of their shortfalls resulted from problems upstream at the wellhead.”

The 2020 US census showed there were 9.9 million households in Texas, 4.5 million of which lost power in the 2021 blackout. This means that 45% of homes in Texas experienced blackouts. The Energy Reliability Council of Texas (ERCOT) reported that the generating capacity in 2021 came from 51% natural gas, 24.8% wind, 13.4% coal, 4.9% nuclear, and 3.8% solar. Even in the unlikely event that wind and solar failed to produce any of its capacity, this would only be 28.6% of the market. The reality is that the frigid temperatures and supply troubles highlighted failures in infrastructure.

During these record low temperatures, the state experienced record high demand with low supply from thermal options such as natural gas. This low supply caused ERCOT to call for outages to avoid damage to the grid. Dan Woodfin, the Senior Director of System Operations for ERCOT later clarified that “significantly more MW of thermal generation were offline than renewables.” Considering that natural gas makes up around 51% of the state’s energy mix, any drop in supply would surely have a much more noticeable impact.

Introducing policies that favor certain forms of energy will cause the energy mix to become less and less diverse. Texas should learn from countries like the United Kingdom who favored their most “reliable” energy source, coal, and ended up nationalizing it in 1947. This led to years of subsidies even when coal was not economically viable and environmental consequences such as toxic smog continued to occur. The free market would have moved away from coal if the government hadn’t continued supporting it. The same is true in Texas. Legislators in Texas are proposing to build more natural gas plants through public investment and introduce a capacity market to reward producers who can guarantee more future generating capacity. The government should not be subsidizing any form of energy, but instead, it should allow for competition to organically drive down prices, increase innovation, and lead to decarbonization. This will lead to both fiscal and environmental sustainability.

By propping up one form of energy, Texas is ignoring the reality that more reliable and sustainable options may come to market later. Competitive markets should continue to operate without state governments picking and choosing the winners within those markets. This will ensure that more reliable and cleaner options can come to market without the interference of needless red tape. Otherwise, we may find ourselves looking for a solution down the road when the state’s preferred choice of energy is no longer the most efficient or reliable option.

Clark Strawser is a contributor to C3 and Adjunct Professor with the Helm’s School of Government at Liberty University. Follow him on Twitter @ClarkStrawser.

Next Article: Why Funding Agriculture Research is a Win for the Climate

How Fires Can Protect Forests